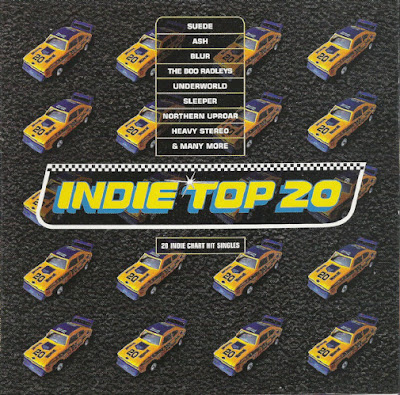 I'm going to take the unprecedented step of talking about these three tracks at once, for one very simple reason- there aren't any further issues of "Indie Top 20" after this, and therefore we won't be able to have a meaningful conversation about how the indie scene shifted after the Britpop dream died. These three tracks scream "1996" in very different ways - one marks what was regarded to be a possible way forward, whereas the other two are stuck at an obvious creative dead end.

Glasgow's Urusei Yatsura lead the charge here, and for a frightening moment in 1996 actually seemed like possible contenders. By this point, the IPC music press began sniffing around wondering where guitar-based music could possibly go next, and a number of journalists drew the obvious conclusion that there was nowhere left to go but back to "proper indie groups" releasing interesting rackets on tiny labels ("Isn't this where we came in?" you may rightfully ask). Hence groups like Kenickie, Bis, Tiger and Urusei Yatsura among others began to be given increasingly in-depth interviews and coverage. A great many of these groups are actually far better than their diminished modern-day reputations would suggest. Bis released some of the best New Wave/ Post-Punk styled teenage pop of the late nineties (if you haven't listened to "Eurodisco" in years, give it another spin right now) Tiger's "We Are Puppets" LP is uneven but utterly exhilarating and sweetly peculiar when it hits the mark, and Kenickie's material remains as sharp, witty and bittersweet as ever. None of these groups were ever likely to achieve much more than The Darling Buds and The Wedding Present did in 1989, never mind Oasis in 1995, but you can't blame music journalists for trying to swing British indie music in a younger, more spontaneous direction. As an amateur journo myself who got endlessly flooded with naff and cynical Britpop related products, I too was desperate for the wind to change direction by this point.

For awhile, it seemed possible that the underdogs might win. Tiger got a slot on breakfast television, Kenickie were quick-witted and comedic enough to get their faces on numerous peak time shows (especially lead singer Lauren Laverne, of whom little more needs to be said) and Urusei Yatsura actually got inside the Top 40 with "Hello Tiger". All these groups seemed to sell records and have a presence despite Britpop, but perhaps partly because of it too. The sudden rush of guitar-based groups making unusual noises entering the charts had confused the mainstream media enormously, resulting in a "sling lots of mud at the wall and see what sticks" attitude. This allowed them to climb into the bottom rungs of the Sunday Top 40 rundown in a way that The Chesterfields, The Blue Aeroplanes and Talulah Gosh would never have managed in the late eighties.

The rather modest success of Urusei Yatsura was heartwarming at the time. "Phasers On Stun" shows how ramshackle and anarchic they could be. Andy Partridge of XTC once spoke of his love of discords, arguing that a song could be made more interesting when "the ball doesn't quite go into the hole". "Phasers" is overloaded with these moments and the ball spins and ricochets all over the billiard table - the track spews chaos everywhere for two minutes, then pisses off abruptly without warning. Seeing "Phasers On Stun" at number one in "The Chart Show" indie chart on a Saturday morning felt unexpected and yet faintly thrilling. Its presence begged all sorts of questions - if this racket was possible at this level, then what else? And why would anybody care about Menswear or Heavy Stereo now?

Or, for that matter, latecomers The Gyres or Sussed, key hopefuls who seemed irrelevant almost as soon as they landed. Both banged their fists on the front door just as the entire Britpop party seemed set to decamp to seedy drug dens in Kings Cross, and desperately tried to keep the swing swinging. "Are You Ready" sounds horribly like enforced jollity, chugging along at an indifferent speed - God knows how many takes of this the group did, but it sounds as if it's the 97th and they're on their last legs. If the single had been released two years earlier with more vim in its veins, it might have been a serious contender, but it just sounds flabby here. Time for bed.

Sussed, on the other hand, were an Oasis indebted band who in the case of "One In A Million" had clearly heard "Definitely Maybe" and decided to "have a bit of that". There were tons of groups like Sussed around on the circuit in 1996 and 1997 (and even much later than that, in fact) all with sneering vocals and harsh, compressed guitar sounds. In this case, the track is zippy and zingy enough to increase your pulse a bit, but there's a similar sense of end-of-party desperation to the whole thing, and little to set them apart from their (by now) hundreds of peers.

So if you're still asking yourself the question "How come Bis, Urusei Yatsura, Kenickie and Tiger all got in the Top 40 and those young hopefuls The Gyres and Sussed didn't, despite their obvious commercial advantages?", now you have the answer.  With every expensive flop release that came out of the Britpop canon, it was becoming clear that we all had to move on somehow. And for awhile, it seemed possible that the lunatics might just take over the asylum.

The slightly lesser-hyped TC Hug show that it was still perfectly possible to create energetic, thoughtful and wistful summery melodies in the Britpop vein and sound better than pedestrian, though. "I'm Doing Fine" just bounces from start to finish, sounding as if it should be blasting from every car in the country. In terms of its overall sound, there's little to separate it from the hectares of other guitar pop based acts of the era, but it's still a neat and likeable piece of songwriting.

Sadly, the group couldn't quite climb into the mainstream with either this or their subsequent releases, and they've become somewhat sidelined in the years since.

And here we are. This is it. The last ever track in the "Indie Top 20" series. And it's not by a big name, or a future star, but by Orange Deluxe, a group formed from the ashes of cult baggy band Five Thirty.

For all that irony and silliness, though, you too will struggle not to be at least slightly moved when the final chord is struck and the harmonised vocals end. Sometimes, even when the band is joking and using epic chords for ironic effect, it can still be moving if the context is right. It just so happens that this is an appropriate, melodically sweet moment to say goodbye.

Look. They've turned the club lights on, and it looks as if there's only a few of us left. We've just had the obligatory last slow song, but as usual, anyone who might have ended up dancing together went home to bed to enjoy each other's company a while ago. Only the truly desperate and the truly dedicated stay to the very end.

It's very late, we're all greasy and sweaty looking and further from glamorous than we've been in a long while - come to think of it, are we getting lines around our eyes, do you think? - and this venue isn't as popular as it used to be. We stuck it out to the very end, and all we've got left now is this flop song going through our heads as we part from our friends to catch a taxi or jump on a night bus home. The solo journey is always the loneliest moment of the evening, the point where the great music has finished and is now just echoing around your brain, and the realities of the remaining weekend's banalities are dawning. At this hour, it might be possible to see the first milk floats whirr into action, or the first Post Office workers going to begin their shifts outside the depot. None of them know you, and probably none of them will ever have heard "Andrex Puppy Love".

You don't know it yet, but you won't be back to this club. In two weeks time you'll hear the news they've had to turn their regular Friday indie evening into an Ibiza Party Night for the good of the balance sheet. This phase of your life is over, but sometimes that's for the best, however sad it feels. We can't all stay young and naive, constantly relying on the likes of Chet and Bee and Tim Millington to show us what's good and what isn't. Sometimes it's necessary to find your own path, your own way forward.

I'll be back shortly to produce one last entry summing up everything we've seen and heard. But then that really will be it. Night everyone.

The Indie Top 20 series ran from 1987 until the mid-nineties, and was - for a time, at least - one of the only places you could actually cheaply buy and discover the key indie artists of the era; the double LPs usually retailed at less than £10 and contained 20 bona-fide indie chart hits. This blog is my attempt to look back on every single track that ever featured on the series in order. Please note - this is not an mp3 blog or a file sharing site, so please don't ask for music to download.